“Give me a screwdriver…I’m taking the door off this stupid closet.”

I awoke this morning (ok, it was 3pm, but you get my drift) to an article on Yahoo stating that Ricky Martin has decided to come “out of the closet” after all these years and announce that he is gay. 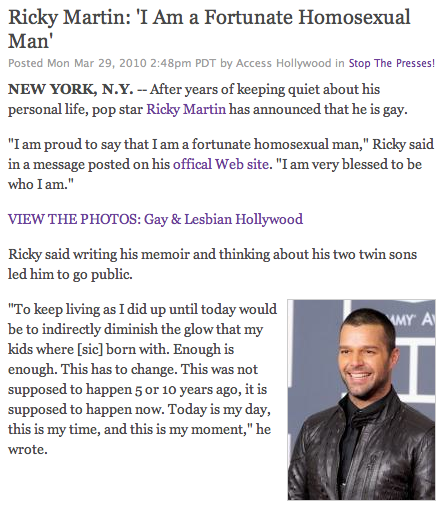 I wasn’t sure if it was just me, or if perhaps I was jumping the gun years ago when I first saw his “She bangs” video…but I thought he was gay ALREADY. How is this a new development..? Granted, we could discuss the accuracy of my “gay-dar” for hours, seeing as I’m not homosexual, or lesbian, or bisexual (for those of you not hip to the hip talk, “gay-dar” is “gay radar”). For that matter, we could discuss the accuracy of a homosexual’s “gay-dar” as well, as I’m sure even THEY are wrong sometimes. Hell, while we’re at it, we could digress altogether and discuss the stereotypical assumptions of humanity as a whole, and question why anyone even HAS a “gay-dar” in the first place…accurate or not. That’s not what I came to talk about today however…because I don’t want to be here all day writing just as I’m sure you don’t want to be here all day reading.

What I DID come to do today was ask a simple question: “Does anybody really care..?”

I understand that as humans, we generally like to know what’s going on in the world…especially in the case of celebrities. People like to be up on their gossip. They like to have information on certain subject matter because it gives them the upper hand in conversation. As soon as you heard that Michael Jackson died, you felt the need to tell someone immediately. But no one wanted to be the first person to HEAR that Michael Jackson had died.

What I don’t understand however, is why someone being homosexual/lesbian/bisexual is STILL news..??

It’s 2010 for crying outloud! A woman won the Academy Award for directing for the first time in history. Our President signed a law finalizing health care which could change all of our lives significantly. Earthquakes are killing people by the hundreds of thousands. Our natural resources are depleting every single minute of the day. Our economy is garbage…not trash…GARBAGE.

…and Ricky Martin being gay when I already thought he WAS gay is the first thing I read about when I wake up?

I was halfway through the process of calling a few gay friends of mine and asking them: “Why would homosexuals even feel the need to stay IN the closet? Why not just tell everyone the moment you find out? Why not just live your life normally regardless of what other people think of you?”

I mean, I don’t go around all day telling people that I’m a heterosexual. I don’t make announcements to the general public that I’m a Christian. I don’t hold press conferences in the wee hours of the morning to tell the world that I’m a mulatto.

So why hide ANYTHING..?

Then it occurred to me…it’s not gays that are afraid to come out of the closet. It’s the U.S. as a whole that is afraid to accept the fact that there even IS a closet.

Seriously America, do we really still care about an individual’s sexual practices?

So your male neighbor sleeps with men. Who cares? How does that affect your day to day activities? So you know a girl that sleeps with girls. So what? Are they having sex with one another on your lawn? On your couch? IN YOUR BED? Can you hear the Elton John music blaring through the walls of their apartment? You can’t..?

So what do you CARE?

Haven’t we, a nation BUILT on maintaining ones rights, religions and beliefs…surpassed this way of thinking? Can’t we, a veritable melting pot of nationalities, thought processes and dirty secrets, just keep our mouths shut and ACCEPT that we can’t control who other people have sex with??

Maybe we could get over a few folks’ desire to sleep with the same sex…no?

Or maybe I should just get my “gay-dar” checked…

3 responses to ““Give me a screwdriver…I’m taking the door off this stupid closet.””