I was seated at a restaurant in the center of Verona one day, enjoying a meal alone in Piazza Bra, when a middle-aged man quietly approached my table. He was dressed in plain clothes; a short-sleeved shirt tucked into his workman’s pants, black boots on his feet, an old ball cap lazily placed atop his head. He began speaking in a language I could not understand, all the while pointing at the tiny, customarily-served ramekin of Italian olives on my table. I presumed he was asking for permission to eat them. I passed them over and watched as he began to place them into his mouth one by one, savoring them. My mood that day was pleasant, and seeing how I had some time to kill and no company to keep, I pushed the chair across from me out from under the table and pointed at it, offering him a place to sit. He looked at it, sat, and resumed eating…slowly, methodically. 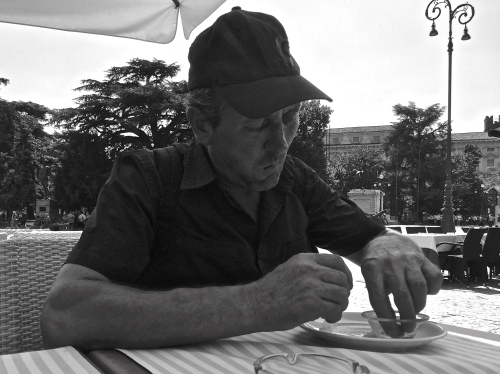 Somehow I felt very natural having him there at the table with me. I felt as if we had been friends for years. I felt as if we had made an appointment earlier in the week to have lunch together and he had just now arrived to join me. I felt as if the logical next stop should be to call my waitress over and order him something to eat…so I did. A few minutes later she returned with the bottle of water and dish I had asked for and placed it on the table. His gaze fell to the plate before him and his eyes narrowed. He looked at me, his face showing signs of confusion. I made a “for you” gesture towards his meal and smiled slightly. He looked down at his plate again and suddenly began to cry. He covered his mouth as if to hold in emotions that had been longing to burst free for hours, days, months. I looked away for a moment, giving him time to experience those emotions…not knowing what to say, not knowing what to do.

He then began to eat. As he ate he told me of his past, his troubles, his worries, his present situation. He shared his life with me. He poured his soul out to me. A stranger, but not a stranger. A friend, but not a friend. I didn’t understand a word he said…but I understood every word he said. As if understanding that I understood, he stopped sharing. For the next ten minutes we sat in silence. For the next ten minutes we were simply two people enjoying a meal, enjoying each other’s quiet company.

After a while the waitress returned and I asked her for the bill, adding a little extra so ‘my friend’ could enjoy dessert when he finished his meal. I gathered my things and stood to leave. He looked up from his meal and raised an eyebrow, curious. I told him that I had to go. He seemed ready to object, as if asking for me to stay so he could thank me in some way. I told him he didn’t need to…my God was good to me, so when I could I returned the favor to others. He stretched out his hand, so I did as well. We shared a handshake. We exchanged foreign goodbyes, then I left. 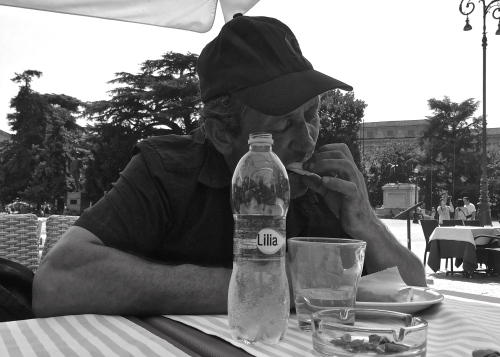 (I’m not sure why I stole a few photos of him during this experience. Probably because it’s what I do. Or more likely because I don’t ever want to forget that day…or him)

Filed under Diary Of A Traveling Photog, The Good In Mankind

Everyday on the news we hear about millions of people who are homeless and starving in cities and countries other than our own. We hear about places we can drop off used clothing items, addresses we can mail money orders and websites we can donate to. We hear about hungry children, broken homes and abandoned family members.

The United States of America. I love this country, I love another country as well because I grew up there and consider it home, but having lived here the last 20 years or so makes makes me as American as I am Italian (as does the combination of my American father and my Italian mother). One thing that I’ve seen, in the USA as well as Italy, is the ever-increasing number of homeless on the streets. I feel a certain pain inside my soul when I see someone in those conditions, not because I don’t want to help, but because I can’t help…at least, not by myself. Although this is a beautiful country we live in, we can’t seem to find a way to take care of our own citizens…let alone anyone else’s.

There has to be a way to come together as a whole. There has to be a way to provide food, shelter and decent living conditions to the civilians of this great nation…especially to its veterans, who have fought tooth and nail for it. I know that it’s possible. I know because I have been around the world, and I’ve seen the good that mankind (and womankind) can do. I know because while in Union Square here in NYC one day, I saw a man approach another man. They didn’t know one another as far as I could tell. They had only the shirts on their backs and the bags in their hands. But when one asked another if he could have a cigarette, a cigarette is what he got…no questions asked.

If two people who have nothing can give to each other, why can’t we all..?

I shot this from the backseat of a taxi while on assignment in Delhi, India.

This little girl was weaving in and out of the traffic that had stopped for a red light…she was begging for money and food. Not visible in this photo, her legs were dirty and her feet were shoeless. I remember thinking to myself how in the United States, a young person with her look might model, or do television commercials.

But in her country, in her city, she was just another street kid with no hope for a real future.

Filed under Diary Of A Traveling Photog, Globetrotting, On Assignment, The Story Behind The Shot