Foreward.
I usually ignore emails sent to me regarding campaign donating of any kind…especially around this time every four years when the Presidential race goes into overdrive. This particular letter, however, I simply could not ignore….you’ll read why below.– F

Here is the email I received… 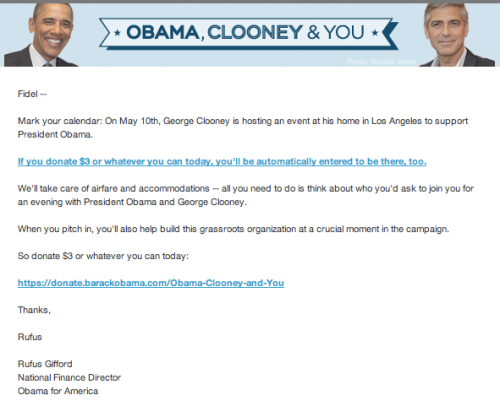 “I’d also be lying if I told you I was the kind of person that would give three of my hard-earned, unemployed, American dollars toward your cause after reading the part about you “taking care of airfare and accommodations” for two random strangers to “enjoy and evening” with the President and an actor who, unless I’m mistaken, has no political position in our country’s White House…regardless of how handsome, charming and morally upstanding he may be. Granted, I too, being not only American but a picture-hungry photojournalist to boot, would love the chance to wine and dine with an A-lister and the Commander In Chief, but I have one serious issue with this scenario Mr. Gifford: how can you justify spending countless hard-earned, unemployed, American dollars to fly two adults to Los Angeles, put them in a hotel and wine and dine them for an evening “A-list style” just for donating $3…??”

“Let alone the fact that this would seem absurdly uneconomical to anyone that’s ever taken a business class…did you (and by default your office and thus the office of the President) not get the memo saying our country was going through a depression? Did you not notice the ever-growing hatred among lower income Americans towards their money-spending, email-sending, campaign-racing counterparts on Capital Hill?”

“Perhaps it would better serve your fundraising needs if you sent out emails to the American public telling them that you’re not wasting their money to fly random, non-political people across the country to have pointless, media-friendly events with folks that could be using their talents and power elsewhere. Perhaps you’d get a more positive response from the people of this country if the emails mentioned instead that their $3 would be used to help put a man back into office that will help them with their job-losing, welfare-needing lives.”

“I’d give three of my hard-earned, unemployed, American dollars to someone who wrote me an email like that….and I’d make sure everyone I knew did the same. You have my word on that Mr. Gifford.”

Filed under Hear Me Roar, This...I Just Don't Get