“The Greatest Of All Time…”

“In 2004, while living in NYC, my friend Gerald Bunsen called me up one weekend and asked if I was available to work security for a photoshoot (I had moved to NYC to pursue acting, but because of my size and character I often found secondary work as a bouncer and private guard). He wasn’t available to make it and needed someone he could depend on to replace him. ‘Of course,’ I said, ‘for who?’…’Muhammad Ali‘, he replied.”
“The photoshoot was for an adidas ad campaign. The team I was on had one job: to escort Mr. Ali from his hotel room down to the street where he would shoot in a car with a few children, then back up to his hotel room. During a meeting that was held before all of this happened, we were given details on how things would progress. Mr. Ali never spoke aloud to us, there was a gentleman with him (whose name I didn’t catch) who spoke with him directly, listened to his replies as they were whispered to him and then relayed the information to us. The photographer asked how long he’d have to shoot, Mr. Right-Hand-Man told him he’d probably have 5 minutes at the MOST to squeeze off a few shots. The photographer wanted more, Mr. Right-Hand-Man said that’d be impossible. When we walked outside I immediately saw why.”
“The second (and I mean literally the SECOND) we opened the front door and set foot on the sidewalk, Mr. Ali was recognized and surrounded. People smiled, laughed, cried, reached out to him, touched him, chanted his name, held out things to be autographed, held their children out to him to be kissed. The security team and I spent the next few minutes (Mr. Right-Hand-Man was right, we had less than 5) holding people back, keeping people calm and witnessing the madness. Although I had met a lot of celebrities while living in NYC, I had never met one as traffic-stopping as him. His presence alone captured the awe and attention of those around him. His smile was addicting…his silence was deafening.” 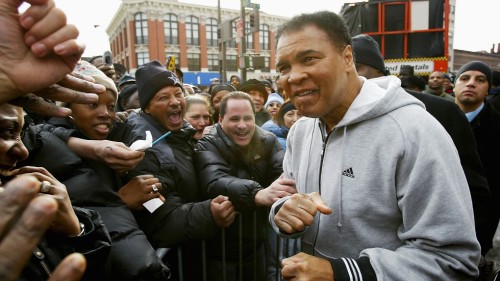 “When we arrived back at the hotel room, everyone shook hands and began their goodbye’s. Mr. Ali was seated at a giant desk, signing autographs and photos for some of the assistants, staff and security team. As I was still a fairly timid newcomer to the whole ‘NYC scene’ and my job was done, I thought it best to simply leave. As I made for the door, my eyes caught Mr. Right-Hand-Man’s eyes. ‘Would you like an autograph before you go?’, he asked. I was never one to ask for autographs, I always felt that having someone’s name on a piece of paper or memorabilia could never fully describe the experience of meeting that person. And although I had a cell phone on me, technology had not yet caught up to where we are today, with our selfie skills and multi-megapixel phone cameras…so taking a photo would’ve required entirely too much time to set up. I couldn’t just let this moment slip by however, it was Muhammad Ali. ‘No thank you,’ I answered, ‘but is it possible for me to just meet him?'”
“Thirty seconds later I was sitting in a chair next to the Greatest Of All Time, introducing myself, shaking his hand and smiling like a 10 yr old. I never once heard his voice, I didn’t need to. Sometimes you don’t need to hear someone tell you about the years they’ve lived, the accomplishments they’ve achieved, the struggles they’ve overcome and the world they’ve changed…sometimes you can just tell.”
“Rest in peace Mr. Ali.”
– F
PS. This is a photo from that weekend…I found it online after some pretty heavy Google searching.

2 responses to ““The Greatest Of All Time…””